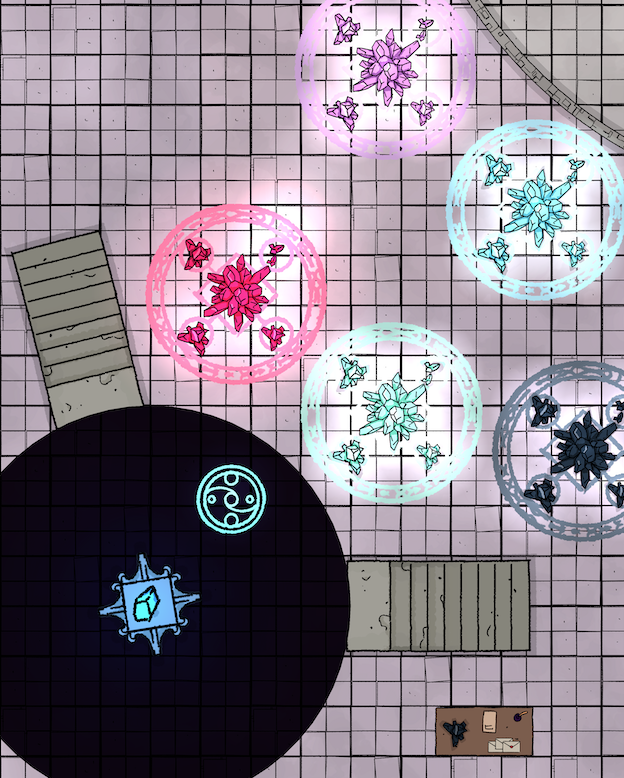 In the Garden, there are wonderous materials and creatures with densely concentrated magic. The Tree of Light that spawns the Tree Elves is one. Another of these wonders is the loathe stone of the Bazvania mountains. Loathe stone is a rare ore that has a potent effect on the emotions of sentient creatures that venture too close to its alluring glow. Though loathe stone is dangerous, it is also immensely valuable. Through proper application of arcana, its naturally harmful effects can be transmuted to instead produce potent magical effects.

During the war between Yarta and the Theocracy of Stan, Bazvania grew rich trading loathe stone to both sides. However, they were much more powerful than Bazvania, and eventually, Lord Kovich of Bazvania was forced to join one, or be invaded by both. Lord Kovich predicted that Stan would win the war and an alliance was forged in his marriage. He chose wrong.

When the arcane prodigy, Mathis Faberman VII, erased the capital city of Stan, its allied feudal states devolved into infighting. Bazvania was plunged into chaos.

Historians have trouble judging Lord Kovich and his knights. There are numerous reliable accounts of the cruelty of these men to both servants and family alike. Still, the extent to which prolonged exposure to loath stone warped the minds of those men can only be guessed at.

In the year 5312, after 52 years of suffering under the hand of Lord Kovich, the Bozvania leadership was assassinated.

The wives of Lord Kovich’s knights took action to liberate the lands of its cruel leaders and poisoned the Bozvanian royalty. The details of that night are naturally secret, but the women who claimed dominion over castle Bozva the next evening could not be denied.

Enterprising lesser nobility that arrived at the castle to claim rulership for themselves were ripped apart by the newly awakened lady vampires efficiently consolidating their rule.

The former wives of the knights of Bozvania, Madam Antalya Ambros, Madam Lidia Lang, and Madam Patricia Patake now call themselves the Knights of Blood Stone Pact, and rule Bozvania as vampires. Life for the common folk of Bozvania has markedly improved.

Za’Ul struck a bargain with the newly minted Knights of the Blood Stone Pact. The lady vampires provide Za’Ul with the highest concentration loathe stones for his experiments. Za’Ul provides the Lady vampires with protection against the stone’s harmful effects and plenty of servants to serve the new rulers of Bozvania. An astute observer would notice that the ladies need far many many more fresh servants than a castle of their size should.

And of course, the souls of dying Bozvanian citizens are collected and delivered to Za’Ul alongside regular loathe stone shipments.

Bozvania was the first country to ally itself with Za’Ul.

The Book of Yarta has remained notably quiet about the reasons why loathe stone might have such a harmful natural effect on sentient life. Emery believes that the stones soak up raw magic from the planet’s core. It is alarming to Emery that whatever is locked behind the Seal of Eons seems… malignant.